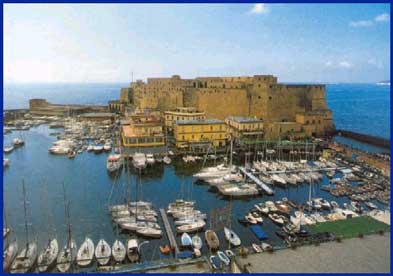 Built on the small island of Megaride, which it is said the place where the Mermaid Partenope got entangled, Castel dell’Ovo rises up in the centre of the gulf, between the marina of Mergellina and the Borgo Marinaro, a short distance from the Villa Comunale.

It was the place where the Cumani founded the first part of the city during the 6th century BC.
In Roman times the site was occupied by the Castrum Lucullum, a fort belonging to the Roman patrician, Lucius Licinus Lucullus, an immensely rich man .

In this place St. Patrizia sheltered from his uncle, emperor of Eastern; the Duke Sergio’s soldiers expelled the monks to built a garrison and, during the centuries which followed, the Normans  and the Angevins extended and fortified the tuff building.

The castle was the royal residence of Charles I of Anjou and of Alfonso of Aragon and in the 17th century it was converted into a prison where was imprisoned also Romolo Augustolo, the last Roman Emperor,  the monk and philosopher Tommaso Campanella, the Princess of Acaja, the King Manfredi’s son and several liberals among them was Francesco de Sanctis.

The castle is well worth visiting.  Note especially the bastions constructed in yellow tuff, the Monks’ Refectory and the splendid view of the gulf from the terraces  on the upper levels, taking in the promontory of Posillipo and the island of Capri which rises up in front of it.

According to a medieval legend, the Roman poet Virgil, who in ancient times was considered a powerful wizard, hid an egg inside a jug hanging in one of the rooms of the castle. Tradition has it that when the egg falls and breaks, the castle and the entire city will fall to ruin.

The interior of the fortress contains medieval structures and includes examples of both Gothic style and much older remains, such as the ruins of a place of worship named after San Salvatore.

Also worthy of note are the Torre Maestra (Master Tower) and the Torre Normandia (Normandy Tower).