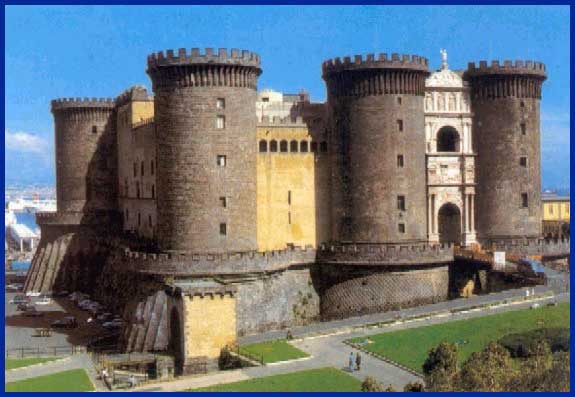 This castle, also called Castel Nuovo (New Castle), situated opposite the Molo Beverello on one side of Piazza Municipio, was built on the orders of Charles I of Anjou.

It was called “nuovo” (new) to distinghuish it from the city’s other castles, and it is named Maschio Angioino in honour of Charles of Anjou.

Its construction was undertaken in the second half of the 13th century under the Angevin sovereign who entrusted the work to the French architects Pierre de Chaulnes and Pierre d’Angicourt even though Vasari assigned  the project to Giovanni Pisano.

Almost two centuries later, Alfonso I of Aragon took measures to carry out considerable renovations and rebuilding work which practically led to its total reconstruction. This work, which was carried out in the first half of the 15th century, was assigned to masters from the Tuscan and Catalan schools who left their own architectural mark on the building.

It was during this period (1455 – 1468) that the Triumphal Arch was erected: from an architectural, artistic and stylistic point of view, this is one of the finest elements in the whole complex.

It can easily be defined as one of the most outstanding works of Renaissance honorary architecture, since it represents an inseparable union between the art of the most important sculptors of the time, and the traditional canons of the Roman celebratory arch from which the former clearly gained its inspiration.
The arch stands admirably between the Torre di Mezzo (Middle Tower) and the Torre di Guardia (Watch Tower), forming a clear chromatic contrast between its own whiteness and the darker piperno (a particular kind of trachyte often used in Naples for building).

Constructed to celebrate Alfonso I of Aragon’s entrance into Naples (24th February 1443), the arch is a complex structure made up of an archway flanked by Corinthian columns placed side by side (in the intrados there is some relief work depicting Alfonso among Relations and Dignitaries of the Kingdom); these columns support an attic storey which holds the splendid sculptural representations of Alfonso I making his Triumphal Entrance into Naples.

Above the attic is a second arch  which opens between coupled Ionic columns; these support a second attic decorated with niches containing the statue of Temperance, Strength, Justice and Magnamity.
Dominating this remarkable achievement is a semi-circular tympanum bearing the allegorical representation of two rivers, and above this stands the statue of the Archangel Michael.

The most prominent names of those responsible for the admirable cycle of sculptores include Francesco Laurana, Domenico Gagini, Isaia da Pisa and Pére Johan.

Having been renovated and modified several times (16th – 18th centuries), The Maschio Angioino today displays the 15th century appearance it assumed following conservative restoration work carried out in the first half of the 20th century.

The castle has provided the setting for many historical events.
Within its walls Pope Celestine V pronounced his decision to abdicate, laying the ground for Boniface VIII.
It was frequented by literary men like Francesco Petrarch and Giovanni Boccaccio, and by the artist Giotto who painted some frescoes here, though these have been lost.

The castle is surrounded by a long, deep moat which used to be covered by the sea.
It is said that many prisoners were thrown into the moat where their bodies mysteriously disappeared.
After a series of inspections, a hole was discovered through a crocodile used to enter the moat and devour the bodies of the unfortunate victims. The huge reptile was killed and stuffed, and hung above one of the castle doorways where it remained until the mid-19th century.

Within Castel Nuovo it is possible to visit the Palatine Chapel, the Baron’s Hall and the Civic Museum.
There is a curious story regarding the caste’s great bronze doorway which still has a cannonball embedded in it. This was apparently fired by accident by French soldiers who were defending the castle from an attack by the Spanish. They are said to have fired it from the inside while the doorway was being closed.

The Palatine Chapel, with its square plan, is characterised by its cross vaulting with windows very similar to those of the church of Santa Chiara. The chapel is also known as the Church of Santa Barbara or San Sebastiano and is said to have been painted by Giotto, but very little remains of this work. Inside the chapel some interesting sculptures by Laurana and Andrea dell’Aquila can be seen, as well as traces of frescoes by Maso di Banco.

The Museo Civico di Castelnuovo, only recently founded (1990), is situated in the St. Barbara Hall and on the two floors above this in the eastern wing of the castle of the same name, better known as Maschio Angioino.

The museum contains a collection of 14th century frescoes come from the Castello di Casaluce, in the province of Caserta. Others from the 15th century were brought here from the Neapolitan  Church of the Annunziata which has been in disuse for many years. The St. Barbara Hall contains fragments of sculptures by Neapolitan artists, produced around the middle of the 15th century, as well as tabernacles by Jacopo della Pilla and Domenico Gagini, and statues by other artists from the same period (of special note is the Virgin Mary with Child by Laurana).

Of particular interest on the second floor is the panel painted by an unknown Neapolitan from  the 15th century.

There are also works by important artists such as Battistello Caracciolo, Mattia Preti, Francesco Solimena and Francesco Jerace.

The silver exhibits are also on this floor: of particular note among the most valuable and beautiful ones is the Blessed Virgin by Giuliano Finelli, a 17th century artist from Carrara, and a St. Barbara by Lelio Ciliberto.
The third floor contains two magnificent works by Vincenzo Gemito, the Boy’s Head and the Fisherman.